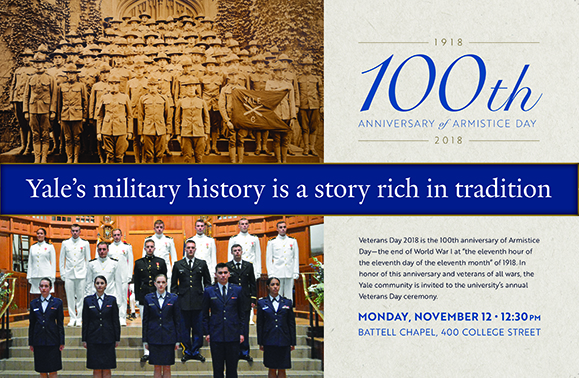 Throughout the morning and early afternoon, Yale Students for Veterans (YSV) will offer passerby the opportunity to plant flags on Cross Campus in honor of veterans. Flags will be provided by YSV.

A conversation with Professors Sarah Cole (Columbia), Richard Kaye (Hunter College), James Najarian (Boston College). This event is co-sponsored by the Yale Office for LGBTQ Resources and the Department of English.

Lincoln’s Code: An Armistice Day Reflection on the Laws of War in American Life

Memorializing War: British and American Monuments to the Great War

The Literary Legacy of World War I: Screening of “Paths of Glory”

Following the film, join Jennifer Orth-Veillon, Brianne Bilsky, and Peter Molin for a conversation about how the novels and memoirs of WWI shaped the rest of war literature in the 20th century.

World War I: Beyond the Front Lines -  Knights of Columbus Museum | One State StreetNew Haven, CT 06511

An Indelible Mark: British Art of the First World War

WWI in the Yale Collections